History of the AAUP at University of Rhode Island

The American Association of University Professors was created in 1915 to represent the common interests of academe and to deal with problems and concerns regarding university policies. In 1931 the local chapter of the AAUP was formed at URI (then called Rhode Island State College) with two members—Professors Joseph W. Ince and Andrew J. Newman.

Records dating back to 1945 convey the Association's role as watchdog over the administration. In this capacity, the Association represented faculty on issues ranging from the dismissal of faculty to peer review and salary equity. During the 1960s, the AAUP National moved toward collective bargaining, providing guidance to local chapters seeking recognition as bargaining units.

University of Rhode Island. In 1971 the Executive Committee presented the idea of collective bargaining to the faculty. Both the AAUP and the National Education Association (NEA) sought the role of collective bargaining agent to represent faculty. An election was held and the AAUP won. In 1972 the AAUP went into negotiations for seven months resulting in a two-year contract. Response to the AAUP was mixed; some faculty were enthusiastic towards it, others negative. The URI-AAUP bargained well for the faculty, but still there were some troublesome issues. Gender equality was one of these issues. Professor Lucy Peng-fei Chang filed a grievance in 1972 claiming that the University discriminated against her based on gender. Her grievance, which was first denied at two levels, then decided in her favor at the State Commission of Human Rights, was overturned in Superior Court.

Responsibilities and workload in managing the local quickly increased, and the Executive Committee soon felt it necessary to consider hiring an Executive Secretary to oversee the Association on campus. Professor Charles Schmidt conducted a study to determine the feasibility of such a position. Schmidt's report favored such a decision, and the Executive Committee ratified his proposal in 1974. Thirty-three candidates applied for the position and immediate past president Professor Robert Gutchen motioned that Ed Marth be offered the job. In July of that year Ed Marth accepted the position.

In February 1979 the AAUP and the Administration again went into negotiations. During negotiations the Board of Regents made punitive proposals, and their negotiating team seemed unwilling to negotiate. The AAUP maintained constant communications with its members on the status of negotiations. Negotiations seemed to be reaching an impasse, and the AAUP considered several alternatives. Strike workshops were established, and a strike fund was authorized. Members voted 162 to 19 to strike if an agreeable settlement could not be reached through negotiations. On September fifth the strike began. Governor J. Joseph Garrahy intervened and after an eighteen hour negotiating session at the State House, a settlement was reached.

Read the story and see pictures of the 1979 Strike.

In 1985 the Chang case resurfaced representing a class of women who "had been, or could have been, faculty working at URI." This case merged with another class action suit and two individual suits. United States District Court Judge Bruce Selya found that the University had unfairly discriminated against its female faculty members. In 1986 it was determined that 225 female members were entitled to compensation in the form of back pay.

In 1995/96 Executive Director Suzanne Taylor brought forth the idea of archiving the URI-AAUP's historical records in commemorating the organization's twenty-fifth anniversary. The Executive Committee authorized the hiring of Tim McMahon to organize the files under the supervision of University Archivist David Maslyn. The records have been deeded in a formal document to the University of Rhode Island. Records are compiled in a collection comprised of eleven series:

Series III: Correspondence of the Presidents 1961-1990

In December 2000, the Executive Committee hired Dr. Frank R. Annunziato as its next Executive Director, effective January 1, 2001, following the retirement of Suzanne Taylor. 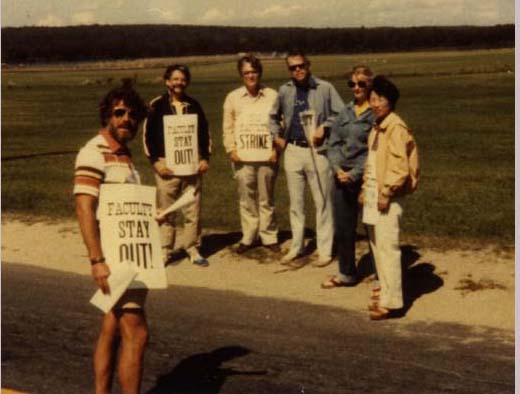 25 years ago from September 5th to the 19th, 1979 the University of Rhode Island Chapter of the American Association of University Professors went on a strike to protest the Board of Regents 7% pay increase proposal that the AAUP argued was not reflective of pay rates across Rhode Island. Contract negotiations between the Board of Regents and the AAUP began in earnest in January and it was clear that the lengthy negotiations were at an impasse by August. On August 6th a meeting was held to authorize a strike if no further progress was made and on September 5th students returned to find their professors on the picket lines. Classes were not held during the strike and students held protests of their own. An injunction was filed against the strike on the 19th . On Thursday morning of the 20th the announcement of settlement was made and the strike ended. A 7.22% increase was negotiated for the first year with an 8.67% increase in the next year. The professors and University administration continued to wrangle over the pay withheld during the strike well into the next year.